Then as now, there was a good deal of interest in do-it-yourself projects. Perhaps, back then chicken owners really didn’t have much of a choice; you made it yourself or you did without.

Let’s remember that in 1887 most men who fought in the civil war were still alive, over 40% of American’s lived on farms (versus 2% today), and the first Sears Roebuck catalog wouldn’t  be published until the following year. If you didn’t  build it yourself, you didn’t have it.

Two small articles in the Poultry Keeper describing DIY projects caught my eye. I thought it would be fun to share these with you. They represent “high” tech poultry equipment design for the time.

An incubator is a device that keeps fertilized eggs warm so that chicks can be hatched. Nowadays, a number of companies make very good electric units for home enthusiasts. These incubators include  both a heating element and a thermostat.  Plug them in, and they’re ready to go.
But in 1887, it wasn’t that easy…..

People had to build their own incubators and so The Poultry Keeper provided design ideas and simple instructions. One design used hot air to warm the incubator and a second design used hot water. That notwithstanding, both function in pretty much the same way. 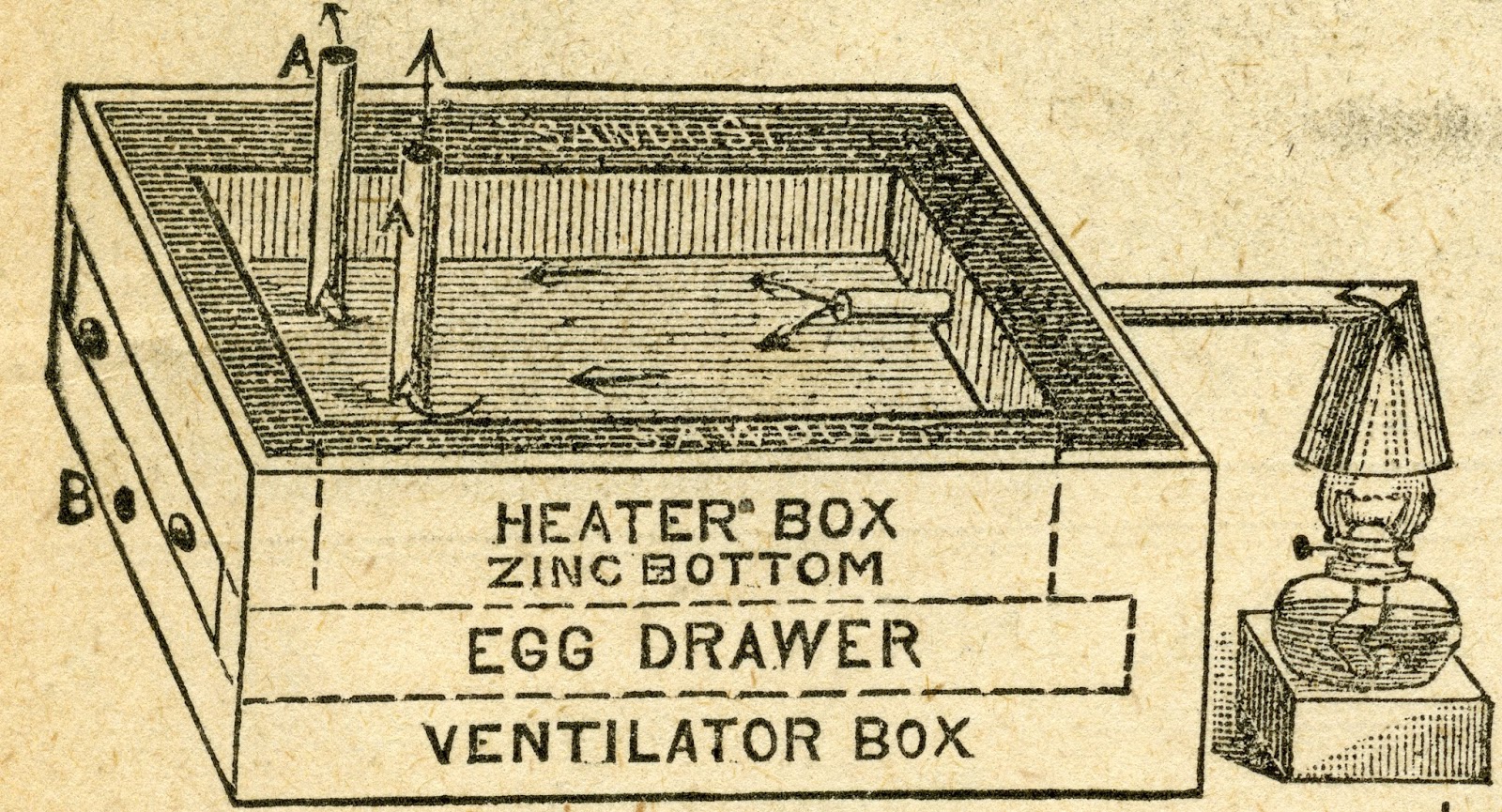 An oil lamp is used as a heat source and functions like a boiler. It heats either air or water, that is then allowed to circulate into a chamber within the incubator to provide heat. If you’ve ever lived in a house that was heated by a steam radiator, you’ll understand exactly how these systems work.

The design shown below is the hot air system. A tin cone connected to a pipe is placed over the globe of an oil lamp. Heat generated by the oil lamp is transmitted to the air within the lamp and is allowed to circulate into the top of the incubator by way of the pipe. 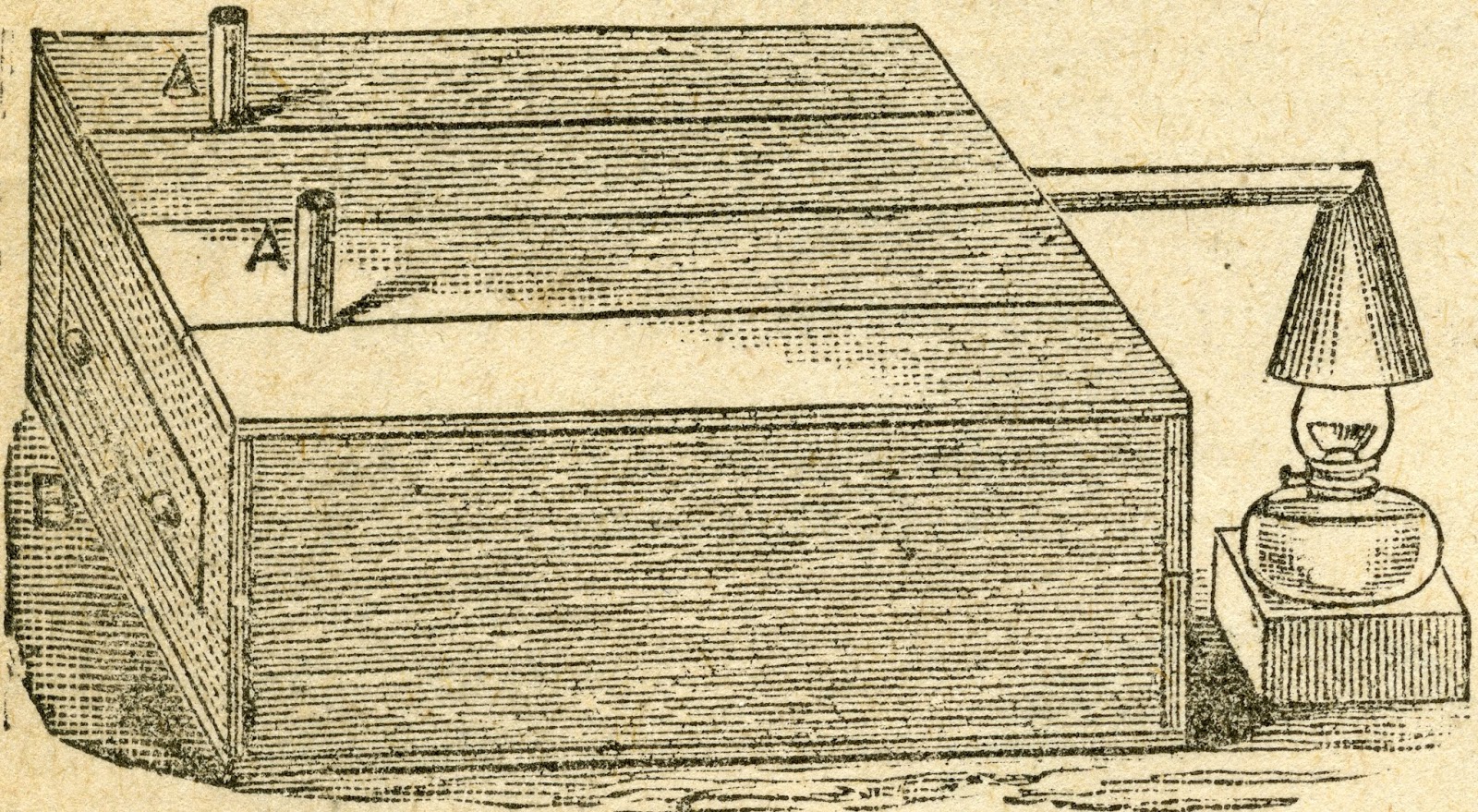 In the same issue, a reader, Mr. G. A. Hayne of Dagerville, Iowa sent a drawing of a “regulator” that could be placed within the incubator to help control the temperature.

However, unlike today’s thermostats, this device did not automatically adjust the temperature. Rather, it sounded an alarm that would let the chicken owner know that the brooder was either too hot or too cold. The owner would then need to manually adjust the wick within the lamp to either increase or decrease the heat.

In figure #1 (cross-sectional view of the regulator) a bell [B] is connected to what appears to be a battery [L].  When a connection is made between the two polls of the battery, current runs through the circuit and causes a bell to ring. There is a switch [R] that sits between the two poles of the battery that is temperature sensitive. This switch is the heart of the “regulator.”

It is constructed of a thin sheet of metal riveted to a thin sheet of rubber. The rubber expands or contracts depending on the temperature in the environment. Therefore, it will either bend upward or downward. The extent of the bending depends on the temperature in the ambient environment. If it bends in either direction sufficiently (In other words the temperature is too hot or too cold) the metal end of the regulator will come in contact with one of two metal screws [I and J]. When this contact occurs, the circuit is closed and allows electricity to flow from the battery to the bell, sounding an alarm that calls the owner over to make an adjustment to the oil lamp.

To make the system work, you only need to set the right distance between the two screws and the metal/rubber switch.  This is done by setting the lower and upper temperatures using a thermometer.

Would this contraption work? I think so! Modern thermostats operate along pretty much the same principle but instead of a metal sheet, the connection is made using a bubble of liquid mercury (like that used in an oral thermometer). When the temperature increases, the mercury expands and creates an electrical connection that turns on your heating unit. 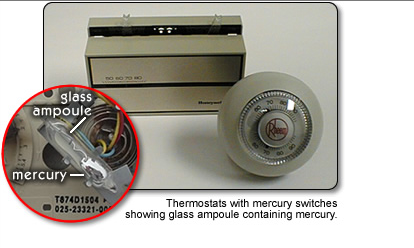 How accurate would it be? It really depends on the materials you use. However, in 1887 it would have been as high tech as it gets. Nest Thermostat move over! 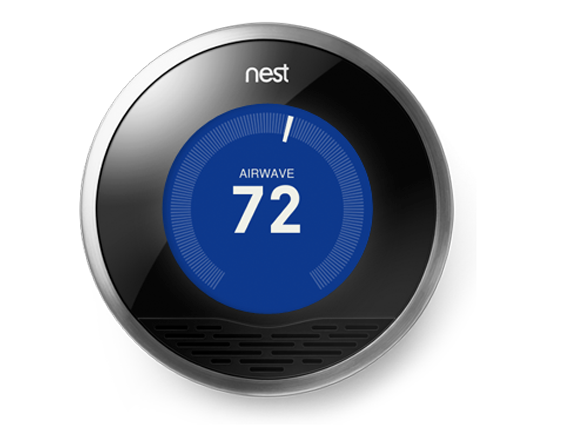 Probiotics For Chickens: What They Do & When To Use Them