Do Your Chickens Need Grit

That brings us to the topic at hand today -- chicken grit.  Grit is mixture of small pebbles or crushed stones that chickens eat in order to help them digest their food. They need grit because chicken's don't have teeth and are not able to chew their food to aid digestion.  Instead, they pass the food into an organ called the gizzard where it is ground up.

How Chicken's Digest Their Food

Chickens consume food with their beaks and pass it into a large sack called the crop.  The crop is really just a storage bag and allows the chicken to eat large quantities of food quickly so they are not exposed to predators for long periods while they are eating.

The food is then sent to the proventriculus where it mixes with enzymes that begin the digestive process.  However, the food particles may be too large for the chicken to effectively digest and so the food and enzymes travel next to the gizzard for further processing. 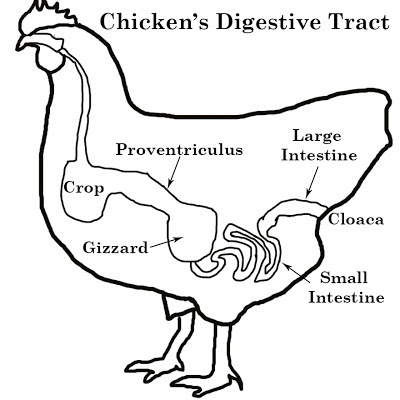 The gizzard is a specialized part of the digestive tract that is constructed of thick muscular walls where food is ground up. You can think of the gizzard as a gristmill for grinding up the food. And to take the analogy a step further, the grit is the millstone for that gristmill. The gizzard squeezes against the food particles and rubs them against each other and any grit contained in the gizzard.  The combined action of gizzard squeezing and the grit, or small stones, rubbing up against the food particles reduces the food to a more digestible size.

The ground up food and digestive juices then move to the small intestine where they are absorbed.  The grit goes along for the ride and are eventually excreted through the chicken's cloaca.

Do Your Chickens Need Grit?

The answer really depends on what they eat. Commercial crumbles and pellets are already ground up finely enough that grit isn't required.  However, if you feed your chicken's whole grains, scratch or allow them to forage for all or a portion of their diet, then you should provide your flock with grit so that they can digest these larger food particles.

To be effective, the grit needs to be of a particular size. Too large and your chickens won't be able to swallow the grit. Too small and the grit will pass through the chickens digestive system without doing its job. That's why you'll find grit in different sizes

There are two different types of grit sold in the feed store and it's important to buy the right type. In this article we've been discussing the insoluble type (not digested and of no nutritional value). Insoluble grit is composed of small stones, generally granite.

The other type of grit is soluble (digestible) and is often made of flaked oyster shells. Soluble grit is a calcium supplement and helps your chicken's build strong egg shells. It dissolves during digestion and will not work to break up larger food particles. If your chicken's have a diet that requires grit, the soluble kind isn't the right type to use to assist digestion.

One other thing that keep in mind is that chicken's generally eat a diet that is very dry. Even free-ranging birds who eat a diet of seeds, insects and vegetable matter will not get enough water from their diet alone to properly digest their food.  Water is essential to digestion, so make sure you provide plenty of clean drinking water.

Naturally, we use the BriteTap chicken waterer since it provides a constant source of drinking water free from contamination by dirt and droppings.  The BriteTap waterer is fully covered and chicken's drink from special valves located on the bottom of the dispenser.

For more information about the BriteTap Chicken Waterer web site. 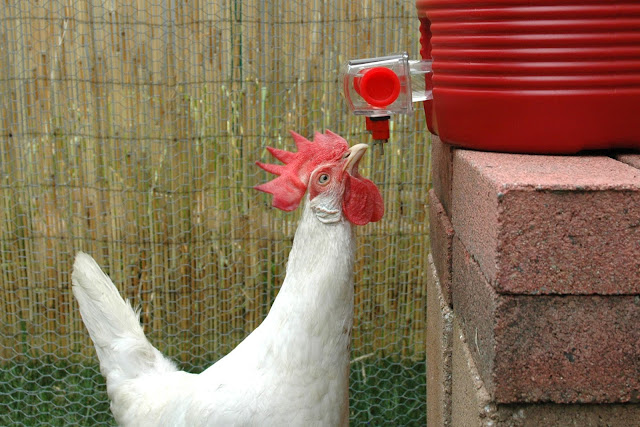 Posting sponsored by ChickenWaterer.com, makers of the BriteTap automatic poultry waterer. The BriteTap waterer shields water from dirt and poop. The water stays clean and there are no messy pans for you to wash out.