How Many Eggs To Expect Your Chickens To Lay

The number of eggs a backyard chicken owner can expect to harvest depends on the breed of chicken selected, the age of the bird and the season. These are detailed below, but we want to issue a spoiler alert...

At the end of this article is a link to an online tool that will estimate the number of eggs your chicken will lay based on its breed and age. In April 2014, we also created a smartphone app called the Cluck-ulator that you can download that included the egg estimator and 5 other cool calculators. Best yet, the Cluck-ulator is free.

Breeds
Champion egg layering breeds such as Leghorns, Rhode Island Reds and Austalorp that can produce an astonishing number of eggs. In some cases, these birds can product 300 or more eggs in their first year of life. Below, various breeds are grouped based on their potential year one egg production.  Backyard chicken keepers should use this as a guideline as egg production can vary from bird to bird and some breeds such as Polish are notoriously unpredictable in their egg laying.

Chickens generally start producing eggs when they are 20-24 weeks old and will produce the greatest number of eggs during that first year of laying.  While commercial egg producers cull their flocks at about 70 weeks in order to maximize their profits, backyard chicken owners should not feel compelled to follow their lead.  The truth is that chickens continue to produce eggs at good levels for many years.

According to research done at the University of Florida, chicken can continue to lay eggs for over 10 , but their productivity does decline considerably over that time frame. Below is a chart that shows egg production over time using the first year's egg production as the benchmark.  The table shows that in the second year of laying, chickens will lay about 80% of what they did in the first year and 70% of the first year's production in the third year. If a hen lives to ten, we would expect her to lay about 20% of the eggs she laid in her first year of life.  Top egg laying breeds like Leghorns can produce 300 eggs in their first year, so even by year ten a Leghorn might produce as many as 60 eggs a year.

Chickens go through a period in winter when egg production slows, or in some cases stops altogether.  This reduction is driven by both a decrease in daylight hours and molting. Molting is the process by which chickens replace their feathers.  The process requires the hen to divert biological resources from egg production to feather production and as a result hens lay fewer eggs.  The winter season also brings shorten day length.  This also negatively impacts egg production by reducing the activity of the chicken's pituitary gland which then impacts production release of eggs in the chickens ovaries.  This is probably nature's way of adjusting the chicken's fertility to better match availability of resources in the natural environment. In other words, reducing fertility when there's less food available for both mother and child.

The degree to which egg production slows varies from breed-to-breed and is the result of selective breeding by us humans.  Breeds that produce relatively more eggs during the winter months include Buckeye, Chantecler, Delaware, Favorelle, Jersey Giant, New Hampshire, Orpington, Plymouth Rock, and Rhode Island Red.

Want to know how many eggs to expect based on the breeds and ages of birds in your flock? How much food and water you'll need? What impact the temperature has on these requirements?

As of April 2014, the egg calculator and five other cool chicken tools including a breed selector, coop planner and food and water calculator are now part of a smartphone app called the Cluck-ulator that can be downloaded from the iTunes App store (iOS) or the Google Play Store (Android)

Click the below links to go to these stores to get your free app: 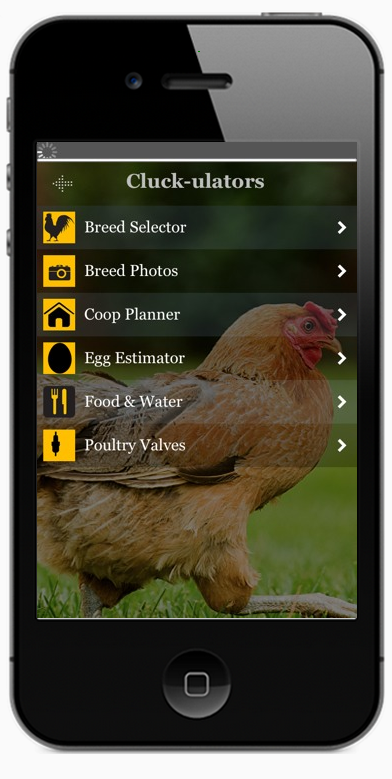 Enter the number of birds in your flock and the calculator provides the following:
Calculator #2: Impact of Temperature on Feed & Water Consumption

Chicken are most productive during their first year of laying, but will produce eggs for many years past this peak period. To estimate the number of eggs you'll collect, enter the breed of chicken and it's approximate age.  The calculator will estimate: