"Practical, Prolific, Profitable" that's how the Rhode Island Red (RIR) was described in the 1890's by Isaac Champlin Wilbour, an important early promoter of the breed. Wilbour's description of the breed is as true today as it was back then; RIR's are wonderful dual purpose chickens that lays 200-300 large brown eggs per year. 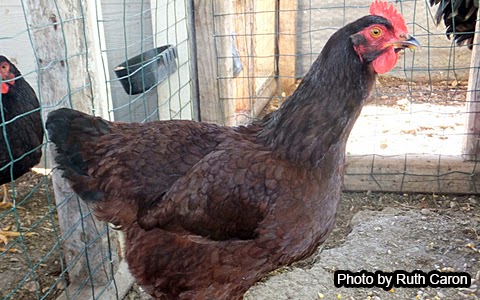 History of the Rhode Island Red

The chicken that we are familiar with today resulted from a series of breeding experiments begun by William Tripp in 1854. Tripp was a sea captain and made routine visits to the coastal town of New Bedford, Rhode Island.  It was on one of these visits that Tripp met a sailor arriving from England with a red Malaysian rooster. Struck by its unusual appearance, Tripp purchased the rooster and allowed it to breed with the hens in his flock.
Tripp noticed that the offspring of these matings produced chickens that laid more eggs and produced better tasting meat. Intrigued, he began a cross breeding program to improve these qualities with a friend John Macomber. Tripp and Macomber crossed the birds with Brahma and other breeds, exchanging birds with each other to minimize inbreeding.

As the resulting chickens improved, they caught the attention of local farmers who were interested in purchasing what was then called either "The Macomber" or the "Tripp's Fowl." One enterprising farmer who made such a purchase was Isaac Champlin Wilbour of Little Compton, Rhode Island.

Wilbour already had a poultry business selling eggs he produced. Looking for ways to improve his own flock, he purchased a number of "Tripp's Fowl" and began his own cross breeding program. According to his grandson David Patten, Wilbour was looking to create an improved dual purpose chicken:

"What he was after was a better all-purpose bird; an improved utility fowl that would lay more eggs, bigger and browner eggs for the Boston and Providence markets, and larger bodies to provide more meat. He seems to have had no desire to breed show birds, but wanted the hardiest kind of stock that would prosper under any conditions, including those of a rigorous New England winter." -- David Patten

Wilbour's business prospered and by the 1890's he had the largest poultry operation in the United States.  The 200 acre farm was outfitted with seventy-five 8' x 12'  chicken houses that accommodated between 3,000-4,000 laying hens.

Wilbour's improved chickens and successful business came to the attention of two professors at the U.S. Agricultural Experiment Station in Kingston, Rhode Island. One of them, Samuel Cushman, recognized that Wilbour had developed a new breed and asked if he had a name for it. Wilbour thought for a second and said "Why wouldn't Rhode Island Reds do?" As other breeders added the breed to their flock, the name stuck.

Interestingly, RIR's at that time were not the deep reddish-brown color that we associate with the breed today and there was also considerable variability in the type of comb with some RIR's having single, rose and pea combs.  In fact, there was still quite a bit of variability in their overall appearance.

"My memory furnishes the picture of one or two red roosters with shining greenish black tail feathers and of hens of a lightish buff with lacings of black. The roosters, and  particularly the hens, had not been brought to the red that distinguishes the breed today and there was certainly nothing resembling the mahogany red of the present show birds." -- David Patten

It was up to later breeders such as Lester Tompkins of nearby Adamsville, Rhode Island to breed the show birds that helped standardize the RIR's color and other traits.

In 1925, The Rhode Island Red Club of America dedicated a monument to the breed in Little Compton. The plaque is pictured below.

In 1954, the RIR celebrated its 100th anniversary. To mark the occasion, Governor Dennis Roberts signed a bill making the RIR the official state bird of Rhode Island.

In 1982, the RIR appeared as one of 50 state birds featured in a commemorative stamp series. At the time of their issue, this was the most popular series in U.S. postal history.

The Rhode Island Red is one of the most successful dual purpose breeds ever created. It fame and distribution spread across the United States and around the globe. Although RIR's tend to be broody, the breed has many excellent characteristics which make it a good choice for backyard chicken farmers and homesteaders.  These include:

However, after World War II, the RIR was selectively bred for increased egg production, greater feed efficiency and lower broodiness.  Today's "industrial" RIR's tend to be lighter in color and also smaller in size than the heritage RIR of bygone days.

If you own a RIR that you purchased from a feed store or hatchery, chances are that you own one of newer industrial strain. These can be nice chickens, but because they are bred for their ability to develop rapidly they are more prone to cardiovascular diseases and bone defects. They are less well adapted to living outdoors and their lifespan is often shorter.

The heritage RIR is comparatively rare these days and is listed as a "recovering breed" by the Livestock Conservancy. If you are interested in purchasing heritage birds, check the Internet for local breeders or contact the Rhode Island Red club of America.