Should You Wash Your Eggs

As a matter of general practice, we've washed our eggs prior to placing them in the refrigerator.  We've also known that many other backyard chicken owners  do not wash their eggs because they believe they stay fresher when left in their natural state.  To determine the best practice, we reviewed some of the scientific literature on the subject and make a recommendation to readers of this blog.

If you don't want to read the full post, skip to the end where we make our recommendation and provide what we believe to be practical advice to backyard chicken owners.

Some Background About Eggs & Bacterial Contamination

Eggs are designed to limit the possibility of bacterial contamination. This makes intuitive sense because eggs must protect the chicken's embryo during incubation.  These  natural protections include:

While eggs are designed to protect their contents, it's important to recognize that the outside shell of the egg is not clean.  Chicken's eliminate waste from their body by excreting it from their intestines through an organ called the vent. This same vent is the door which is used when a chicken lays an egg. In this case, the egg passes from the chicken's oviduct and through the vent before being deposited in a nest box.

As you can imagine, using the same organ to pass waste and lay eggs has profound consequence for the cleanliness chicken eggs. Even eggs that look clean to the naked eye are contaminated by a layer of bacteria on their surface. Once in the nest box, eggs can pick up additional bacteria from mud, bedding or any other materials that are tracked into the nest box by the comings and goings of chickens.  Again, the shell and the cuticle protect the content of the eggs, but the surface of the egg above the cuticle is generally loaded with bacteria.

The Benefits of Washing Eggs

The primary reason to clean eggs is to remove the layer of bacteria that sits on the surface of the shell. This can significantly reduce health risks posed to humans:

Why Not Wash All Eggs?

So why not wash the eggs and get rid of this bacteria? As it turns out, it's not so easy to wash eggs properly. One can actually do more damage then good if eggs aren't washed and stored the right way.

Washing removes much, but not all bacteria, and once the egg is washed the remaining bacteria have an opportunity to do increased damage because the protective cuticle is now compromised. Here's how it can happen; if an egg is washed in water that is colder than the egg itself, the interior contents of the egg contract. This causes a vacuum to form inside the egg that pulls water and any remaining bacteria on surface of the shell through the pores and into the interior of the egg. So eggs need to be washed under very specific temperature if they are to remain safe.

The process by which the eggs are washed is also important. In the past, commercial egg washing was done by immersing the eggs in a tank of water with detergents and sanitizers.  This method has been largely abandoned because it was discovered that the water could become highly contaminated and actually increase contamination by transferring bacteria through the wash water.

Modern commercial systems wash eggs in an in-line process that is fairly complicated:

In a commercial production environment where best practices are employed, washing eggs is a safe and effective method for preventing food borne illness.  However, achieving best practices is probably difficult, or impossible, for most backyard flock owners:
While none of the above is impossible for the backyard chicken owners, we think that consistently implementing best practices is unlikely. As a result we've come around to the idea of washing only those eggs that clearly require it to remove large quantities of dropping and debris from the surface. Such eggs would be particularly unsanitary to place in the refrigerator unwashed.

Our recommendations for keeping your eggs safe are a combination of preventative measures and what we believe are pragmatic hygiene practices: 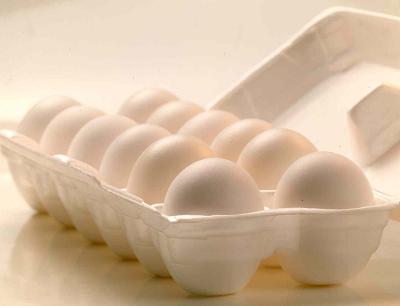 We make these recommendations understanding that reasonable people can come to different conclusions.  In the United States, the USDA requires egg producers to wash eggs prior to sale. In most of Europe, the opposite is true.

Let Us Know What You Think

Please leave a comment and let us know whether you currently wash your eggs. We'd also like to know if any of the information in this article will influence your current practice with regard to egg washing.
_________________
Article posted by ChickenWaterer.com, manufacturer of the BriteTap chicken waterer.

Some sources to look at for more information:

Opinion of the Scientific Panel on Biological Hazards on the Request of the Commission Related to the Microbial Risks of Washing Table Eggs, The EFSA Journal 269, Sept 7, 2005.